Roaring through Yellowstone on a summer evening at dusk, Sam and Josh Soholt roll down the windows to see the majesty of the land unfiltered by glass. High in their 4x4-conversion passenger van, they watch the staggering landscape unfold, trunk heavy with harvest, bodies sore from a day spent on foot doing what they love with their favorite person by their side.

Life is good. Words could never do it justice.

So they tip to the sky.

Josh and Sam grew up in Sioux Falls, South Dakota — a part of the country with a low enough population to make supervised playtime a luxury for most parents. A sunrise family duck hunt was a weekend occurrence, but during the week, their parents encouraged them to “get out of the house and leave us alone.”

“Anywhere between the northeast corner of South Dakota and Sioux Falls was fair game. We just had to stay in-state and be home by sundown.” – Sam Soholt

If there were a lifetime achievement award for “most snakes caught in a bucket,” it’d go to the Soholts. Raised by the swamp, the prairie, the woods, and one another, Sam and Josh slowly graduated from climbing trees to building tree stands, from riding bikes to driving trucks, and from catching snakes in buckets to hauling birds on stringers. As much as mom, dad, or their sister Molly, South Dakota was a member of the family.

“Both sides of our family come from an agriculture background, so we’ve never not had a relationship with the land, the dirt, and the animals that live in it. Hunting and fishing, and enjoying the outdoors have always been ingrained in who we are.” – Josh Soholt

Eventually, they outgrew the rules to stay in-state and be home by sundown. Josh moved to Colorado and opened a backcountry hunting outfitter. Sam went to the state university and learned the art of photography. Living in different states, this is the part in the story where two brothers may begin to grow apart. But not these two.

Whether it was planning their next hunting trip, throwing around marketing ideas for the outfitter, or daydreaming about vehicles on Craigslist, Josh and Sam always found a reason to stick by the other’s side, regardless of their home addresses.

“I am intensely fortunate. It’s unbelievable to have someone in your family that you enjoy being around so much and who you can hang your hat on and trust with everything. Sam is all those things. Our ideas and our efforts are better when put together. They always have been.” – Josh Soholt

One day, they made one of those Craigslist daydreams real. They found “the one” — a used school bus from a district just south of Josh’s home in Colorado. Sam made the purchase on New Year's Day, 2016, with plans already in mind for spring. The original concept for the bus was to build a basecamp for turkey season. “Like a camper, but better. More ours.”

The project really took off when they decided to give it a bigger mission. On the road, the sharp green school bus always turned heads. Why not direct those heads to an important message? They called it “The Public Land Bus,” a rolling billboard for the fight to protect, maintain, and keep public lands accessible. The mission earned the project fresh media coverage, sponsors, and wind beneath its wings. Sam began a year-long tour of public land parcels across the country, making content about the beauty, the recreational splendor, and the different political challenges that each place was facing along the way.

They were onto something. The bus, the tour, and its message introduced Sam and Josh to a wide world of hunters, conservationists, and online followers — all with heart for the same causes. On the tail of this successful tour, the brothers co-founded Public Land Tees, a screen-printed t-shirt company aimed at spreading awareness and raising money for conservation organizations of all kinds.

BFGoodrich TiresⓇ is excited to partner with the Soholts on a t-shirt collaboration, inspired by their adventures and work in the hunting and conservation communities. Proceeds of this shirt will go on to support the Tread Lightly! Outstanding Trails program.

“When we were kids, the land was our playground. As we’ve gotten older, we’ve realized that the money, the people, and the efforts to maintain those vast acres of wilderness are significant. The more you know, the more you want to help. Diving into the world of conservation has opened many doors for us. There's no way to quantify the web of relationships, ideas, and actions that have grown out of what we've been up to.” – Sam Soholt 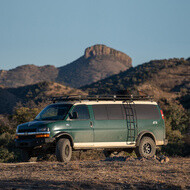 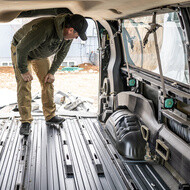 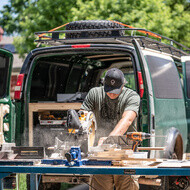 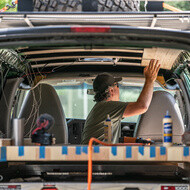 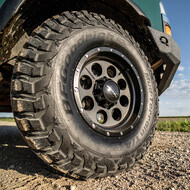 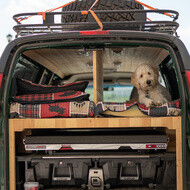 Through that web of relationships in the hunting world, Sam met Brent and Dave of Quigley Motor Company, a shop specializing in 4x4 van conversions. At the time, they were in the market for a truck to build into a smaller, nimbler hunt basecamp. But after hitting it off with the Quigley crew, they decided to pivot that plan and convert a van.

“Many new people were getting into the hunt space, and we wanted to begin a new project that was a more attainable build. The van is a great platform. All the lessons that we had learned from the bus build segued right over.” – Sam Soholt

The van conversion was different from the bus conversion. More personal. Its mission wasn’t as grand as the bus.’ But it was equally important. It was all about maximizing the time they spent together and minimizing the impact their adventures had on the land.

Their recipe for low-impact exploration? Plan your route, stay on the trail, pack out what you pack in, and remember: it’s not all about the trophy you bring home. It’s about the experience.

Also, get some good tires.

“Sam and I both have had bad tires before. When you have bad tires, you get stuck. And when you get stuck, you tear the place up trying to get out of being stuck. You end up doing a lot of damage and having a much bigger impact on that environment that you would have had otherwise.” – Josh Soholt

After picking up the van from Quigley in Pennsylvania, Sam and Josh put around 15,000 miles on the odometer before so much as tearing out a seat. Many of these miles were spent pitching ideas back and forth, planning out how to make it great. Both brothers mentioned this as their favorite part of the project. Like hunting, co-creating, and catching critters in buckets, daydreaming together is one of their many brotherly pastimes.

“Sitting down together to build a purpose-driven rig tailored to our hunting style and needs was really fun. And at the heart of why you build a rig is to go out into the world and share experiences in it together. That was the real joy of the project.” – Josh Soholt

From the solar panels up on the roof, to the molle webbing panels on the doors, all the way down to the BFGoodrich® Tires Mud-Terrain T/A® KM3 tires, the Soholt’s van conversion is absolutely a hunter’s daydream come to life.

For a complete walkthrough of the build, check out the Soholt Brothers YouTube channel. You can also keep up with the adventures of Sam and Josh on Instagram.

Or, just head out into the wild and follow the howls.

Living Life to the Maximus

Matt Tarro and  Brandon Denson are on a mission to help people with diabetes live active lifestyles through their nonprofit, Bolus Maximus. 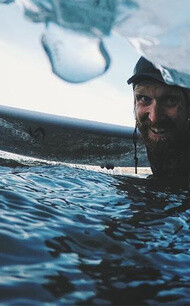 Discovering Purpose on the Open Road

You could call John Rathwell a lot of things. A photographer, a former pro kayaker, an amateur mechanic, a volunteer firefighter, a coffee roaster, an adventurer...the list goes on.

Writer and competitive runner Morgan Sjogren takes us on a jaunt through her wild, epic life living in the American southwest out of “Sunny” her Jeep.