The First Tires to Orbit Earth

As history would have it, the day the STS-1 Columbia Shuttle took off was the “dawn of a new era in space flight.” But before it was a new era, it was a test. A proving ground to show that the reusable, shuttle-based flight system could work. The mission was to launch, get to orbit, perform some tests, and then, just 54 hours later, come back in for a landing.

A landing built on BFGoodrichⓇ Tires.

The First Tires to Orbit Earth

STS-1 was the first crewed mission in six years, aboard the world’s first reusable spacecraft. It stood 14 stories high and weighed 2,000 tons (with a full 500,000-gallon fuel tank.) To lift that weight off the ground, into the air, and out of the atmosphere, the shuttle’s three engines and twin solid rocket boosters needed to create 6.5 million pounds of thrust. That’s more than 42 million horsepower.

An American spacecraft had never carried humans on its maiden voyage before. Everything had to go right in the nine minutes it took to blast off the face of the Earth and into the vastness of space. Just as it reaches orbit, the shuttle releases its main, now empty, fuel tank. The tank will break apart as it falls into the Indian Ocean below. A little lighter, the shuttle officially enters orbit, traveling 18,000 mph, 150 miles above Earth.

Safe atmospheric re-entry is one of the biggest challenges in spacecraft engineering. So big, NASA avoided it for years at a significant financial cost. Even with today’s technology, re-entry remains the most stressful undertaking in spaceflight. It’s the make-or-break moment of every endeavor, and each time it’s undergone, the whole world stops to watch. Astronauts hold onto their seats. Ground control holds its breath.

As the shuttle falls back to earth, speed causes friction, and friction becomes heat. Temperatures skyrocket to more than 2,500℉ as the atmosphere meets the shuttle’s white-hot glowing frame, producing friction. It’s impossible to re-create this situation in a lab. This first test flight was the lab.

After two carefully choreographed barrel rolls, the shuttle made it through the heat and turned to face its final test: the landing. Thousands of excited reporters and citizens gathered near Edwards Air Force Base in California to witness the feat. They stood on top of trucks and Winnebagos, hugging their cameras and waving their U.S. flags as the Columbia lowered its landing gear — four main landing tires at the base and two at the nose.

The engines were off, turning the shuttle into a glider with only one chance to get the landing right. At around 200 mph, 200,000 pounds of spacecraft bounced down onto four tires. Seconds later, the two nose tires joined them. Slowly, the shuttle came to a stop, completing what was an impressively unremarkable landing. 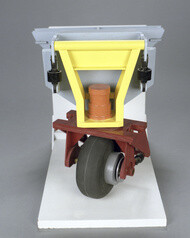 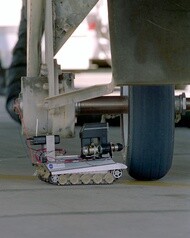 Image 1: Model of the steerable main landing gear fixture designed to hold the shuttle tire.
Image 2: The Tire Assault Vehicle (TAV) about to drill into an overheated shuttle tire.

The Columbia shuttle was a unique vehicle in many ways, even by NASA’s standards. The shuttle was built to exit the atmosphere upright like a rocket, but re-enter the atmosphere horizontally, like an airplane. The key difference and biggest challenge was the landing. All preceding NASA vehicles had landed in the ocean, where the landing’s downward force and heat was absorbed by water, and returning crews and equipment were recovered by boat. This shuttle had to land on a runway, so its heat and downward force would have to be absorbed by itself. No small feat.

The onus of this challenge fell mostly on the shuttle’s landing gear, which had to be designed to survive the punishing temperature swings of a trip to space (as low as -60℉ and as high as +2,500℉), and then withstand the intense levels of force involved with a shuttle-scale return. These environmental conditions were way outside industry norms.

So, they turned to the tire manufacturer that was already skirting the norm.

The period leading up to the first shuttle mission saw several revolutions in car and truck tire technology come out of the U.S., each focused on building tires that perform in demanding conditions. In 1976, BFGoodrich Tires introduced the world’s first all-terrain tire, creating a whole new category. In 1980, they did it again, introducing the world’s first mud-terrain tire. Both categories enabled drivers to explore with confidence on and off pavement. Their technology and their spirit for enabling the world’s explorers made them an ideal match for the demanding and inspiring NASA shuttle program.

BFGoodrich Tires and BFGoodrich-owned Cleveland Pneumatics developed the landing gear for NASA as a package. They began work in 1972 and went through two major design iterations before taking flight in 1981. Coming in at a whopping 34-ply rating, the second-generation tire’s task was to provide more payload ability, more crosswind reduction, more shock absorption, and more runway traction. A sky-high order.

According to STS-1 pilot Bob Crippen, all the shuttle’s systems, including the first tires to orbit Earth, “exceeded all expectations.”

Building for Decades of Exploration

The Columbia’s maiden flight was an achievement in aerospace technology that had never been realized in the history of manned spaceflight. A decade itself in the making, it formed the basic building block for decades of space exploration to come. The shuttle’s reusable design offered NASA a vehicle with the payload performance for regular missions, saving billions of dollars and years of work spent on additional spacecraft development. In just 54 hours, the idea of going to space became something that could be routine. This wasn’t a test anymore. It was the dawn of a new age.

This pioneering flight was commanded by seasoned astronaut John Young, who — upon his safe return to earth — had this to say:

“I can’t tell you what a tribute this is to the American working man and the American working woman, too. You can’t imagine the variety of people who worked on this vehicle, from all walks of life, of all capabilities and limitations. They proved that they can do the job. They proved it for all the world to see. I’m mighty proud to be associated with folks like that.”

The feeling, John, is mutual. 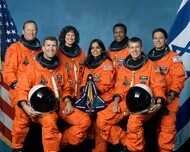 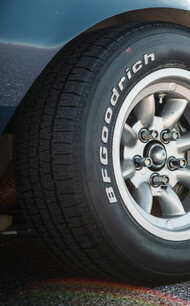 Our newest tire launched recently, and it’s been several years in the making. We asked its Product Manager, Brandon Sturgis, how does a new BFGoodrich® tire get made?

The First Tires to Go Coast to Coast

In 1903, two men and a dog embarked on the first successful cross-country road trip, inspiring a nation to dream about the power of what a car could do.