This year’s SCORE Baja 1000 race looms right around the corner — but is it a right turn or left? How sharp? Is there a ditch somewhere we need to worry about? And finally: on a scale from one to six, how fast can we safely take this corner?

When you’re thundering over the desert terrain, corners come at you fast. And hard. For an off-road racer, a corner isn’t just a corner — it’s a variable-laden chess move. One whose data must be crunched, communicated, and then executed on all the blink of a dust-distracted eye.

Chess is an imperfect example because, increasingly, off-road racing is a team sport. It’s not a battle of mind against mind — but of minds against minds. And while plenty of corner-taking credit is due to the master drivers who earn their place on the Baja podium, today, we’re shifting our recognition over a couple of feet.

Just right of the spotlight, desert racing’s navigators calmly, clearly, and calculatedly co-drive through the storm. Some don’t even stop for a nap halfway. We spoke with three of the Team BFGoodrich® Tires’ most successful navigators to learn more about life on the passenger’s side. 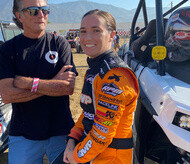 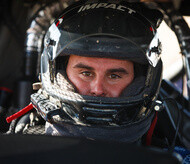 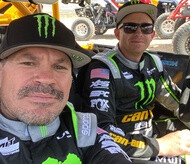 Erica Sacks is a well-respected navigator working with Sara Price and a handful of other drivers. She’s also the owner and operator of Waypoint Nav, a school and training source for off-road navigators of all experience levels.

Jason Duncan is an accomplished racer-turned-navigator who has raced with a handful of notable off-road athletes, including Luke McMillin, who he’s been racing with since 2019. He’s also the CEO of Suspension Development Group, an off-road tuning, setup, and service provider for racing vehicles.

Beau Judge is a well-decorated off-road racer on his own but also serves as a navigator when he races with Phil Blurton. Both together and on their own, the two have come to dominate the SXS Pro circuit in the US and in Mexico.

Navigators were not always a mainstay in off-road racing, but in recent years, serious drivers have all had someone with them in the cab. Although their roles and responsibilities vary from team to team, navigators no longer feel like an optional piece of the winning puzzle. So, what changed? Each navigator we spoke with said the same thing: the pace. As race vehicles have become faster and faster, having two brains on board to share all the enormous in-the-moment decision-making load has become absolutely crucial.

It’s all about time. Even in races hundreds of miles long, top competitors are still finishing within seconds of one another. In races this tight, every second matters. A small mistake can be the difference between a podium finish and just a finish. Navigators help avoid small mistakes.

“Trust is a huge factor. When you get to a place where you truly trust each other, you can reach a state of flow and pick up valuable seconds here and there along the way. It’s almost easy. You just keep clicking along, closing gaps, passing cars, and closing gaps again.” – Erica Sacks

“Years ago, you could flip your vehicle, get it back on its shoes, finish a race, and still win. But these days, the competition has gotten so stiff— one thing goes wrong, and you’re out of the running. The pace of everything is a lot faster. I have to call turns quicker and really watch the engine’s heat to make sure we’re not pushing our vehicle too hard.” – Beau Judge

The task of the navigator, often, is to multitask. While their core responsibility is to manage the race team’s GPS system, calling out notes along the race course for safety and strategy reasons, navigators are also on board therapists, consultants, comms managers, field mechanics, and more.

“Outside of the driving itself, we are the eyes and ears on everything. If anything goes wrong in the vehicle, we communicate with the pit crew and try to fix the problem. We’re also a little bit of a psychologist, keeping the driver sane and moving forward throughout a race. I think a good navigator is a calming presence. A few of my drivers have said that about me.” – Erica Sacks

“You have to be very comfortable multitasking but also be able to focus on one thing if needed. I might be calling a note about a pin while talking on the radio while doing the math to answer the question ‘what position are we in?’ all in the same breath.” – Jason Duncan

Roles and responsibilities vary widely from team to team, driver to driver, and navigator to navigator. But ultimately, the idea is to isolate the driver’s responsibilities to just driving. It’s important that they’re focused on the course and nothing else.

“My goal as a navigator is to enable my driver to drive blind – this means that even if dust or a crest is blocking the driver’s view, he or she knows where we are and what to do. Sara and I are so close that I know exactly how she likes to operate. But when I'm with other drivers, I have to figure out what they need. I observe them for weaknesses and strengths, learning where I need to be stronger and generally figuring them out.” – Erica Sacks

A Familiar Hallway in the Dark

The core responsibility of the navigator is to call notes about the racecourse out to the driver during the race. They are also the authors of those notes, which are created during the pre-running phase. Through methodical note-taking, the navigator takes a race course and breaks it down into each straight, crest, and corner. Styles and systems vary, but everything gets a name, a measurement, and a marker on the map.

When creating notes in Baja, Jason begins with a GPS system and a voice recorder. Every point along the course that feels noteworthy gets a numbered waypoint dropped on the map, followed by a verbal description of what he sees there. The 25th note along the course might sound like this: “Twenty-Five — straight airplane; ditch on the outside.”

As you can imagine, this first pre-run can take a long time. How detailed these notes get is entirely up to the driver and co-driver team. Each team finds what works for them, and they stick to it. In this year’s Baja 1000, Jason will be in the passenger seat for every mile – offering co-driver support for both Luke McMillin and Rob McCachren. Both drivers have very different preferences and approaches to navigation.

“I raced with Larry Roeseler in 2017, and we ended up only writing down seven notes. He’s just old-school like that. Touching his GPS felt like touching my grandpa’s radio. Rob Mac is a little different. He doesn’t want to trust a co-driver with note taking, so he does it himself and uses a GPS app called Lead Nav to read them aloud. Basically, Siri is his co-driver. I’m just there to help if anything goes wrong with the vehicle.” – Jason Duncan

For Erica, who uses rally-style navigation notetaking, dips are rated as single, double, or triple caution, and corners receive a number one through six to report the turn’s radius (really an indicator of how fast the team can take the turn), plus a direction and maybe a danger cautionary note. A thousand-mile race may have 8,000 markers each with an accompanying note.

“By the time we’ve pre-run the course six times and edited our notes accordingly. It’s not like we have it memorized, but we do get to a place where we know the course like one might know a familiar hallway in the dark.” – Jason Duncan

The driver-navigator relationship is almost akin to family. Successful racing couples — and they really are couples — are often inseparable, sibling-esque friends as well as teammates. They spend enormous amounts of time with one another, and that closeness is only magnified by the mind-melding experience of competing together in the same vehicle. Like a star doubles tennis duo, winning race teams are one vessel with two brains — two brains, four wheels, and one undeniable chemistry.

“Chemistry in the car is everything. When you have it, you become one with each other and the vehicle. Race day is a bit like a dance. You need to be in sync, falling into a rhythm where you, the driver, and the vehicle are hitting your marks and your lines as a team. There’s a point where this is not just effective but enjoyable.” – Jason Duncan

“Sara and I are as close as it gets. We’ve lived together; we did everything together for years. Outside of just racing, we would work on her UTVs together. We’re like sisters. I get mistaken for her all the time.” – Erica Sacks

Each navigator we spoke with sits on a unique place along the driver-navigator spectrum. Erica dedicates all of her time to navigation. She even spends her downtime training others to become better navigators. Jason is a driver-turned-navigator who still gets behind the wheel now and then. And Beau is a driver on his own, as well as a navigator for Phil Blurton.

Each of these people and their team is a force to be reckoned with in their competitive fields. They clearly have found an edge, regardless of their backgrounds. But the question naturally comes up — to specialize or not to specialize?

“I really think it’s important to have another racer in the car with you as your co-driver. As a racer myself, I can give feedback to Phil that other navigators can’t. If you have a hyper-specialized person in that seat, they’re probably not listening to the car or noting how hard the driver is pushing it. They can't give that important feedback. ” – Beau Judge

“I think it helps a lot that I have racing experience as a driver – I can easily put myself in the driver’s seat and think about what they want or need to hear. That said, dividing responsibilities works really well for us. I trust everyone on my team to do their jobs well, and it clears out my head so that I can do my job well.” – Jason Duncan

Erica credits her rapid growth in the navigation space to her open mind and willingness to ask a lot of questions. She lives by the idea that just because something worked yesterday doesn’t mean it’ll work today. Because winning is a constantly fluctuating target, being good at navigation is too. Like the methodical practice of pre-running, editing, and pre-running again, it’s a never-ending, iterative process.

Traditionally, a good navigator was a reactive problem-solver on the racecourse. Today, they’re a proactive strategist. One half of a player in the world’s highest-speed chess match where there’s always another variable, another call, another pass, or another obstacle around the bend.

And it’s always your move.

If to “err is human,” and “to forgive is divine,” then to rescue a stranger’s upturned rental Jeep out of a rocky gulch on an 80-something degree day in Moab is downright heroic.