A Fellowship of Yellow

Close your eyes and think of a Ford Mustang. You probably pictured it in red, right? The color red and Mustangs are synonymous not just in car culture but in pop culture, too. In many ways, muscle cars were made to be red. They’re bold. They’re loud. They’re fast. And they’re deeply American. When you see a red Mustang running BFGoodrich® Radial T/A® tires drive by, you might feel the need to stop and salute.

The deep Americana roots of the Mustang itself is part of what makes yellow Mustangs a bit special. They’re unexpected. A pleasant surprise. See a yellow Mustang cruising, and you can only smile. It’s still an icon. But, it’s an icon with a twist.

Yellow has been in the Mustang lineup since the beginning. In 1964, along with 14 other color choices, Ford offered two yellow options: “Phoenician Yellow” (Ford paint code M1633) and “Sunlight Yellow” (Ford paint code M1729). Both shades were light and pastel in hue. “Phonecian Yellow” was so light that you could almost call it “Buttercream.” Pastels were all the rage in the mid-60s, and no one was surprised to see they were offered in Ford’s first lineup. But as time went on and consumer tastes changed, yellow became a pretty rare color offered in stock vehicles.

A standout in the industry, the Mustang is a vehicle where yellow, or some version of it, has been consistently offered to the public throughout its decades-long run. 42 unique shades have been released in the 58 years since the Mustang debuted, many offered more than once. It was around, but yellow didn’t show up each and every year. The cadence and quantity of vehicles that Ford put out over the decades have kept the color just rare enough to still be special. 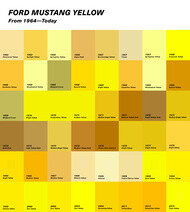 Color-centric car clubs are pretty common today, but this wasn’t always the case. At this year’s Carlisle Ford Nationals show — the largest all-Ford car show in the world — clubs dedicated to Black, Blue, and Red Mustangs were all in official attendance. But in the Mustang world, this trend started with yellow. Specifically, the Yellow Mustang Registry, who were attending Nationals together for the 20th consecutive year. We spoke with the Registry’s president, Kevin Cluck, about the club’s history, its popularity, and its sunny disposition.

“We were the first ones, and then everybody else followed suit. Yellow is a trailblazing color, for sure. It takes a special kind of person to own a yellow muscle car. You have to be energetic and outgoing, with a bubbly personality. Most of us are very happy-go-lucky people.” – Kevin Cluck, President and Member No. 650

The Yellow Mustang Registry (often abbreviated as YMR) was founded in 2001 by Steve Shraeder as a forum on StangNet.com. At the start, there were about 30 members, but word of mouth (digital and otherwise) kept that number growing. The group took off and soon began meeting up. The first-ever gathering was at a Ford Dealership in North Carolina, and the second was Carlisle Ford Nationals in 2002.

Today, the Yellow Mustang Registry radiates around the world, boasting over 12,000 members. They have their own website with a complete member database, a Twitter page, multiple Facebook groups, and a TikTok channel is coming soon. A worldwide phenomenon, all in celebration of the color yellow.

Kevin was born in North Platte, Nebraska into a Ford family. His grandfather was a Ford guy, who passed that on to Kevin’s father, who passed it onto him. It’s a familiar tale. With a familiar opening scene.

“I was about six, walking in town with my grandfather, when I heard this rumble. Mustangs have a very distinct exhaust, and you hear them before you see them. I whipped around and watched it take a corner — an early 70s Mach 1. My jaw dropped and I asked my grandpa ‘what is that?’ He said, ‘that there, boy, is a Ford.’ My mind has been hooked on that rumble ever since.” – Kevin Cluck

Over the years, Kevin has poured his heart and soul into five different Mustangs. His first was a 1995 GT in “Canary Yellow.” To this first build, he added wings, body kits, and modified the engine to up the horsepower. His current car is a very special 2003 Saleen S281-E Mustang Speedster in “Speedlab Yellow” (a custom Saleen shade.) It was originally Steve Saleen's personal car and is modded with all available options you can get on a Saleen Mustang. To this masterpiece, Kevin has added nothing.

Part of the massive success of the Yellow Mustang Registry is the simplicity of the concept. The prerequisites to join are simple: own a Mustang, any Mustang, that’s painted at least 50% Yellow. You don’t need to be a super savvy builder or a wise gearhead to get in and start learning from others. Everyone with a set of the right keys belongs. It’s a formula that makes for a delightfully diverse family tree.

“We have members who build drag cars that aren't street legal, showing up to events with people that just bought a car off the lot last week. And they’re all welcome! Also, once you're part of the family, you're in for life. If you sell your Mustang for a different car, you're still a YMR family member, and you're welcome to all our events.” – Kevin Cluck

The “all are welcome” game is easier said than done when it comes to clubs. But the Yellow Mustang Registry walks the walk and talks the talk. For example, their events rarely feature a “best in show” category. Kevin has been very careful to avoid the types of prizes and contests that promote competition centered around who can outspend their friends to get to the top.

“I like to do awards like ‘Craziest Trunk Decoration’ or ‘Wildest Rearview Mirror Ornament.’ Things that fuel people’s creativity. I want the group to throw the money subject out of the window. All we care about is that you show up with a good attitude. We're not here to feel elite. We’re here to have fun and enjoy the fellowship of one another.” – Kevin Cluck

For the curious, a recent winner of the “Craziest Rearview Mirror” prize somehow managed to rig a small aquarium, complete with live fish and aquarium decorations, onto their rear view mirror.

Members of the Yellow Mustang Registry identify one another by their member numbers. The lowest numbers were attributed to the founding members, and so on. Each new member receives a decal for their vehicle featuring their YMR number. As of June 2022, the most recent member number went to Travis Warden of Texas, No. 12093. The YMR Facebook post introducing him (alongside numbers 12076 through 12092) is peppered with “welcome to the family” comments, each signed off with the commenter's number.

At Ford Nationals in Carlisle, we also chatted with John K. Jennings, Member No. 4920. John had traveled all the way from Detroit to attend the event and show off his sleek 2003 Cobra Coupe, complete with BFGoodrich® g-Force™ COMP-2™ tires. The car is painted a blindingly-bright “Zinc Yellow.” After owning this car for over 20 years, John still loves driving it, especially at Yellow Mustang Registry gatherings.

“I like all the yellows, but Zinc Yellow is special. I love that it’s kind of sporty and impossible to ignore. Even at YMR events, I stand out.” – John K. Jennings, Member No.4920

Like many other special car clubs, the Yellow Mustang Registry is much more than a Mustang club. It’s a worldwide network. It’s a family. And it’s a steady reminder to look on the bright side.

“Yellow makes you feel alive. It's a bright, happy color. And it draws the eye, especially on a car. When I’m on my own, a few people always stop to ask me about my Mustang. But when I’m with the group – for example, we drove through Gatlinburg, Tennessee together recently – everyone drops what they were doing to walk outside and watch us cruise by. It’s an event. A highlight of the day. The jaws in town definitely drop.” – Kevin Cluck

The jaws drop. The iconic rumble roars. And a new generation of six-year-olds tug on their grandparents’ sleeves to ask: “what is that?”

“I always think to myself ‘that kid could be a future Yellow Mustang Registry president’ or even a future Ford exec or designer. All it takes is inspiration. The sky's the limit.” – Kevin Cluck

So, You Want to Start a Car Club?

Well, you're in good company! We spoke with the leaders of four diverse car clubs about their trials, their successes, and if they have any advice for the next generation of club leaders.

See the story
The Great Acceleration: How the Horsepower Wars Changed Tires.

Since the 1960s, the average horsepower and torque of passenger vehicles sold in the U.S. skyrocketed in what is sometimes called “The Horsepower Wars.”

See the story
Building for the Future

With all major manufacturers fully embracing electric motors, it’s clear that the world of cars is changing. We asked two EV-passionate builders: what does it mean to build for the future?